You can’t go anywhere in Arizona without seeing evidence of its cowboy and Indian heritage.

When I visit tourist sites concerning the cowboys, however, I read the information and then have doubts as to whether what is being said actually happened or if it falls more into the category of myth or legend. 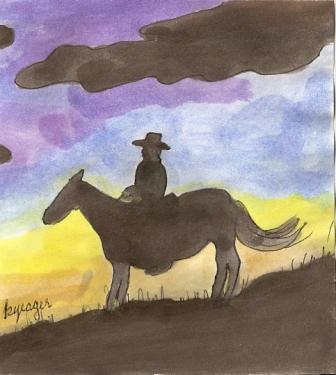 For example, the Amerind Foundation Museum, in Cochise County about an hour east of Tucson, between Benson and Willcox, is chock-full of ancient artifacts from archeological digs and has information about local Indian tribes as well as tribes throughout the US. The information seems scholarly and I assume accurate. However, thirty miles to the south is the town of Tombstone.

This is the Mecca of cowboy “history”. Just looking at the above two internet sites will give you a picture of what I’m talking about. The information you get blasted with in the latter is all about the Earp brothers, Doc Holliday and the Gunfight at the OK Corral along with all sorts of fictional hype.

We’ve visited Tombstone several times. In the historic buildings and bars are pictures of Doc Holliday, Big Nose Kate, the Earp brothers, Bat Masterson, Billy the Kid and the Clantons and McLaurys. These were real people who lived in the area back in the late 1800’s. But then around town there are also pictures of John Wayne, Clint Eastwood and other movie stars who seem to get equal billing.

Throughout the day you might see men walking around the town dressed up like cowboys. Every one of them looks like a gunslinger. I’ve looked at actual pictures of old west towns including Tombstone during that era and what I see are men without guns standing in front of work projects, alongside horse and buggies or on wooden walkways in front of buildings like mercantile stores or cigar shops. The only time I’ve ever seen pictures of men with guns are individual posed shots, just like the dress-up photos you can pose for today at tourist sites.

I assume that most of the time these townspeople went about their business, shopping for goods and supplies, sending a telegram or doing their banking. But the daily life of a shopkeeper or telegraph operator or bank teller is not what legends and movies are made of. My only conclusion is that the myth is more compelling than the actual history. Maybe we really don’t want to know the truth about this relatively short period in U.S. history.

The Gunfight at the OK Corral, which I’m told didn’t actually take place at the actual corral, only lasted for 28 seconds and ended with three wounded and three dead. This is the single most noteworthy historical event for which Tombstone is famous. Probably every American knows something about this incident.

Now think about modern day America and what you see on the nightly news. If you live in a big city does 3 killed and 3 wounded seem like a monumental event that will go down in the annals of history? We lived in Rochester, New York for a year and there were more murders involving gun play in a two-week period. There are no heroes or legends coming out of Rochester as far as I know.

Every culture has its legends and myths. England has King Arthur and the Knights of the Round Table, Japan has the Samurai Warriors, India has the Ramayana with Hanuman the Monkey Warrior, China has the Monks of the Shaolin Temple and the US has the cowboys and the Wild West.

Don’t get me wrong, I like the cowboy myth. Many of my childhood heroes were cowboys. These men willingly stood up for what was right even though doing so put them in grave danger. They all followed an internal code of ethics, something we seem to be in short supply of in the modern world. But the men I’m thinking of are Gary Cooper, Jimmy Stewart and James Arness, not actual historical figures. Of course the real world is more complicated than the “cowboy world”. In today’s modern society rarely are there good guys or bad guys, but just a bunch of people from a variety of backgrounds caught in complicated situations. No wonder the cowboy world is so appealing.

Our cowboy myth has been evolving over the years. John Wayne, the good guy, was always fighting with the Indians who were the bad guys. Kevin Costner would never be in a movie like that. Actually they don’t put out many cowboy movies anymore. Even though in modern times the cowboy legend isn’t as popular, the essence of the myth is alive and well and usually takes place in outer space. When the drama does take place on earth, the bad guys of today are no longer the Indians, cattle rustlers or outlaws, but more likely to be capitalists, government officials , drug dealers or terrorists.

Since I now live in the heart of cowboy country, I wanted to check out for myself whether there was any truth to all these cowboy stories. I went to the Pima County library in Tucson and started reading newspaper articles from that era. I was surprised at what I found. I read articles in the Arizona Weekly Star from the 1880’s. In almost every issue there was a report on a stage coach hold up, a jail break, cattle rustling or cowboys shooting up a town after imbibing too much liquor. From 1881-1886 the Sheriff of Pima County, which at that time included the towns of Tucson, Benson, Willcox, Tombstone and Bisbee, was a man named Bob Paul. He was 6 feet 5 inches tall and weighed 245 pounds. In article after article Sheriff Paul headed out to chase after some bandits, sometimes with and sometimes without posses. He was often gone for days and the articles would speculate about what might be going on. When he finally returned and the incidents were recounted, very often the affair had ended in a shootout with the outlaws. Sheriff Paul either brought the outlaws back into town for trial, or killed them in the shootout. It was fascinating reading, but now I’m more confused than ever. I was ready to pass judgment on the cowboy era as just being a product of our collective imagination promoted by the public media. But it appears there actually was a wild west and men like the fictional Matt Dillon lived after all.

I don’t understand why there aren’t any movies about Sheriff Bob Paul. Maybe his name is too ordinary.

Return to read more of Michael's Retirement in Arizona articles....