The Stillness of the Desert

One of the factors that drew us back to living in the southwest was our love of hiking in the desert. Hiking is one of the activities that Katie and I enjoy doing together.

It’s great exercise, which is motivation enough, but mainly it allows us to get away from the civilized world and become totally immersed in the natural one. The desert is so different from the lush thick forests we were used to in the northwest, but we quickly began to appreciate this arid, expansive environment. 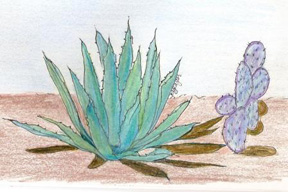 Not everybody likes the desert. I was first introduced to it as a kid on a family vacation in the ‘50s. We traveled on historic Route 66, which at the time wasn’t historic yet. I knew the Nat King Cole song about getting our kicks on this highway and because of it I could name many of the cities we were traveling through. In Winslow, Arizona we saw old pickup trucks with Indian women sitting in the beds in back, colorful blankets wrapped around them. At the time I remember thinking my mom would never let the family stick her in the back of a truck. But these women didn’t seem to mind and one of them smiled at me as we drove away from a service station.

My sister, Karen, and I loved our family excursions in the summers. Like so many families of the time, our parents would load up the car and we would take off from our home in Missouri to points north, south, east or west. Sometimes we would be on the road for a week, but for our western trip our parents took two weeks vacation from work. After several days of driving, we entered the southwest desert. I was excited to see palm trees, cactus and mountains. We were definitely somewhere far away and exotic.

I was shocked at the intensity of the heat. There were no air-conditioned cars in those days, so we stayed in motels during the daytime and drove through the desert at night after it cooled off. The motels were out in the middle of nowhere, but had swimming pools so Karen and I were happy. We discovered that the oppressive feeling of heat went away after we got wet. And if we went directly under one of the shade trees around the pool, we actually felt chilly. This was very different from the kind of heat we were used to in Missouri. The kind you couldn’t escape no matter where you were or what time of day or night. We marveled at how fast the desert cooled down in the evening. It was our first experience in low humidity.

But I didn’t learn to really appreciate the desert until we started hiking in it. It’s like being in a natural garden, each plant standing out in its own unique way, adapting and surviving in this dry, harsh climate. We have learned the names of many of these plants: Ocotillos, Chollas, Prickly Pear, Agaves, Aloes and the stately Saguaros, unique to the southern Arizona desert.

The desert can be a harsh teacher as well. We’ve learned to wear sunscreen and protective clothing and have plenty of water to keep our bodies hydrated. We also know to stay alert and vigilant on the trail to possible dangers. It is easy to get stuck by the many plants with sharp spines or to surprise a rattlesnake lying under a rock ledge by the side of the trail. We’ve actually only encountered rattlers twice in all of our hiking in the desert. We once saw a young one sunning itself on a rock, minding its own business.

Another time, Katie was in the lead and was startled by the sound of rattling. She screamed and ran further down the trail, her scream freaked me out and I ran the other way (Hey, we’re basically city people and ever since Vietnam I’ve been sort of jumpy). We waited and in a few moments a big rattlesnake crossed the path right where Katie had passed and continued on its way down the hill.

We have found that the animals in the desert are similar to those in the northwest in that they do not want to encounter humans. There is a small type of lizard, however, that is an exception to this rule. These little guys pop up on the top of rocks very close to where we are walking and appear to like watching us walk by. I’ve stopped and talked to them on several occasions. They are interested and alert and not afraid of us. In case you’re wondering, none of them have talked back to me. Not yet anyway.

What really draws me to the desert is its stillness. To experience the stillness we have to become still ourselves, which is the desert’s most profound lesson.