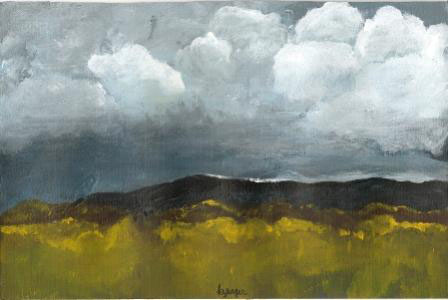 Here in Arizona, we are waiting for the monsoons. Actually it is more proper to say we are waiting for the monsoon thunderstorms. I read that monsoon means a change in the major wind system. Most of the year, our winds come from the west and northwest. When the summer starts heating up, the hot surface temperature causes a low pressure system which pulls the cooler moist air in from the south where the clouds are forming over the Sea of Cortez and the Gulf of Mexico.

Last year when Katie and I were thinking about moving to Arizona from Washington State, we decided to visit in mid-July. July is the most active time for the monsoon storms and we weren’t disappointed. We were only visiting for a week but we experienced two major thunderstorms. One of them happened when we were returning by car from Sierra Vista to Tucson. We watched as the black clouds headed our way and the heavens opened with a vengeance. The rain fell, or more accurately blasted down from above, so hard and thick we had to pull over fast with the rest of the cars and wait it out. We couldn’t see one inch in front of the car. Driving became total guess work. And besides this torrential water assault, lightning and thunder began happening all around us. We could actually see lightning bolts hitting the ground. It was exhilarating and frightening at the same time.

The official summer monsoon season begins here in mid June and ends in September. There is a shorter monsoon season in the winter as well. Tucson even has an official festival to kick off the “Summer Monsoons”. It’s called Dia de San Juan Fiesta. It’s named after St. John the Baptist. Story has it that 450 years ago Francisco Vasquez de Coronado stood on the banks of the Santa Cruz river praying to St. John for rain to help with the crops. On June 24, 1540 the rain started. The festival corresponds to that day. This year was the 12th annual Tucson Festival. It opened with a blessing and then a parade along the Santa Cruz River led by community elders. There were food and information booths, but the main activity was a rodeo.

The violent thunderstorms of the season can be dangerous in several ways. Every year people get swept away by rushing water. The ground is so dry and hard that the water runs to the nearest low point and rivers spring up all over the place including across the roads. The other danger is being struck by lightning. Lightning especially loves to strike golfers and it doesn’t care what kind of game you’re having. The local news broadcasters all spend time warning the citizens about the dangers during the monsoon season. But despite the violence of these storms, everyone looks forward to them arriving. The plants are thirsty and we are all melting.

The only other place I’ve ever lived where there was a monsoon season was my year in Vietnam. I lived on a small base-camp that was dry and dusty much of the year. When the monsoon storms came, the entire base-camp turned into a mud pit. We had trouble keeping our weapons and gear clean. I never had to stay out in the field during the storms and felt bad for the guys who did. No matter the weather, the war must go on.

We’ve endured weeks of 100 degree plus weather so far, but still the rains haven’t come. Quite a few times we’ve watched the clouds building across the valley around and behind the mountains. We could see the dark shadows extending from the clouds to the earth and knew that it was raining over there. We’ve had cloudy days with big white and black clouds all around, but no rain. I assume the rains will come. I guess St. John is busy in other areas for the time being.