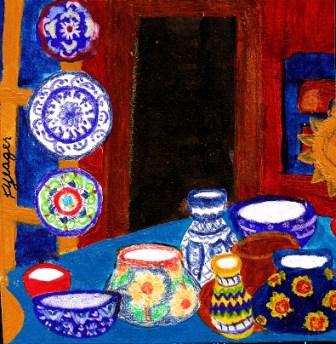 Another place we return to often is Tubac, Arizona. It is about 40 miles south of Tucson.

This small town is currently an artist colony, golf resort and growing retirement community. The mostly old, but some new adobe buildings are now inhabited by shops and restaurants. These are what attracted us in the first place and keep us going back. When we get weary of browsing, there are two excellent places that serve espresso drinks.

We like to sit at shaded tables sipping iced lattes and read, write, sketch or just watch the folks go by. We’ve also discovered we like hiking and birding along the Santa Cruz River historic Anza Trail near the town. The “bosque” is thick with trees making it hikeable even in the hotter months.

Tubac is the oldest European town in Arizona, established in 1752. It was first a Spanish Presidio built to protect the missionaries and settlers from the surrounding native tribes. Apache warriors drove the settlers out several different times. In 1860 Tubac was Arizona’s largest town. During the Civil War the soldiers stationed in Tubac were conscripted into the Confederate Army. In 1948 after lying abandoned for years, an artist named Dale Nichols started an art school there, eventually bringing Tubac back to life. There are numerous web sites with information about Tubac. Two good ones are www.desertusa.com and www.tubacaz.com.

When we mention to them that some of our friends or relatives are coming for a few days, they have this look in their eyes like, Just wait a few years and see how many come. So if our visitors stop showing up after the first year, we’ll just have to venture north and visit them, preferably during the hottest months of the summer.

The rest of the year we’ll have lots to do with lots of good weather to do it in.